Good afternoon,
I hope that you are well. I do NOT authorize their registration.=

Please read this=
letter carefully since this is an urgent case. We are an agency engaging i=
n registering brand name and domain names. Today, our center received an ap=
plication from COCPT International Ltd applying to register isffexperience =
as their brand name and some top-level domain names(.CN .HK etc). After our=
careful investigation, We found the main body of domain names is same as y=
ours. As a professional registrar, We are obligated to inform you of this s=
ituation.

We are handling the application and we need to confirm whether o=
r not you authorize them to register them? Let me know your answer ASAP so =
as to solve this promptly. Thanks for your cooperation.

Football Clinic 2016 – Yuri Youth Foundation
On August 22, 2016, Yuri’s Youth Foundation (YYF), in partnership with the ISFFE and Alexandra Park Community Centre (APCC), hosted a free Football clinic which was attended by nearly 50 children/youth. YYF ran the clinic, providing equipment, and was assisted by some awesome Toronto Argonaut players. The ISFFE organized, promoted, recruited the kids. Two kids received prizes. One prize for Most Valuable Player (MVP)  was a NFL football signed by New York Giant, Mark Herzlich and donated by the NFLPA. The player received a MLB Baseball signed by Toronto Blue Jay, Jose Bautista for Most Valuable Effort (MVE) donated by the MLBPA. The APCC hosted the event at Ryerson school park and provided refreshments at the Centre. The players hung out and signed autographs. A fun time was had by all. Check out the photos.

Free Argos Games for Youth in Alexandra Park
During the 2016 Toronto Argos season, James Yurichuk’s Yuri Youth Foundation in partnership with the ISFFE sent over 60 kids/youth served by the Alexandra Park Community Centre to Argos games. They were provided with dinner, T-shirts, and a VIP meeting. James Yurichuk is a true MVP!

On Friday May 6, 2016, the ISFFE held a 3-point basketball competition and pizza party. Participants came from all over the city. The winner received a Raptors T-shirt and the runner-up received a signed Mike “Pinball” Clemons Toronto Argonauts cap. (pictured below)

ISFFE will be running more intimate events summer 2017 that allows youth to gather in small groups to chill and interact with one another. Prize Donations are welcome for these events.

ISFFE/ APCC EDUCATION GRANT: It aims to support continuing education of youth in the community by funding a free university/college course. The youth (22-30) will have the option of auditing the course, if he/she chooses, to arrest anxiety about entering post-secondary education. This could serve as a bridge to start a degree or diploma program.

THE ROCME1UNIT GRANT: Provides an artist with free recording time at the studio accredited with creating the hook for “Who Let the Dogs Out,” and a spot to perform at the ISFFE Fan Experience.

A 3-point competition was hosted by CK, a pro basketball player. The winner received a team-signed basketball donated by the 905 Raptors. 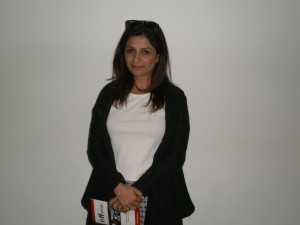 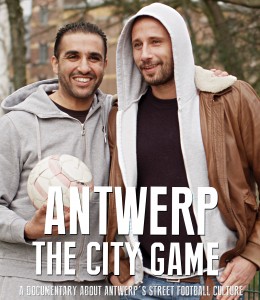 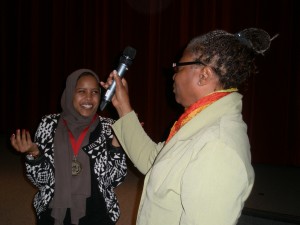 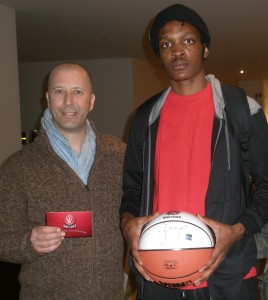 Sports Matter –  Producers, Leraldo and Keante
The importance of sports for youth living in urban communities and for revitalization efforts in the City to consider the needs of the community with regards to sporting facilities. 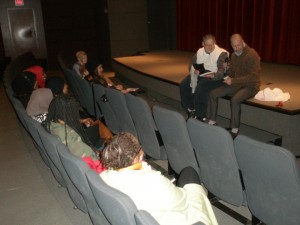 My Second Family – Producer, Gordon States
The role that wrestling plays in bringing joy to a special needs adult and the bond it created with him and his late father.

The 2015 ISFFE Fan Experience gave attendees an opportunity to meet with sports people and take part in interactive events. The event was affiliated with the Toronto 2015 Pan Am/Parapan Am IGNITE program. 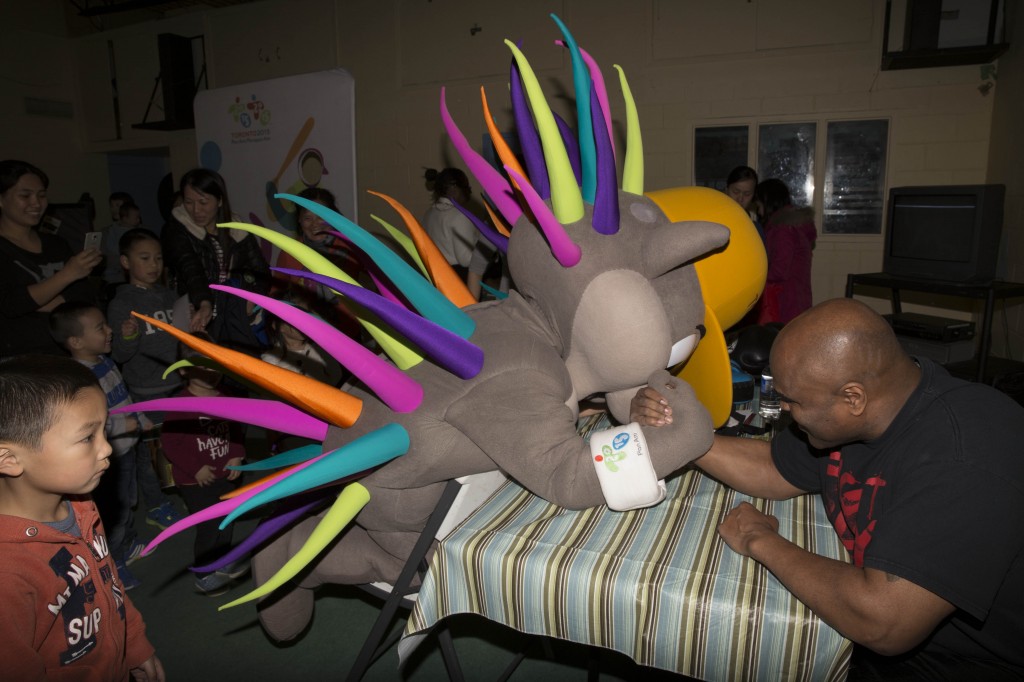 Gary Goodrich vs Pachi the 2015 Pan Am/ParaPan Am mascot

TO2015 Pan Am/Parapan Am Athlete, Papito Wilson attended the Fan Experience. The IGNITE Pan Am/ Parapan Am program was a partner of the Fan Experience and also featured an appearance by Pachi, the Mascot and distribution of Pan Am memorabilia to fans. 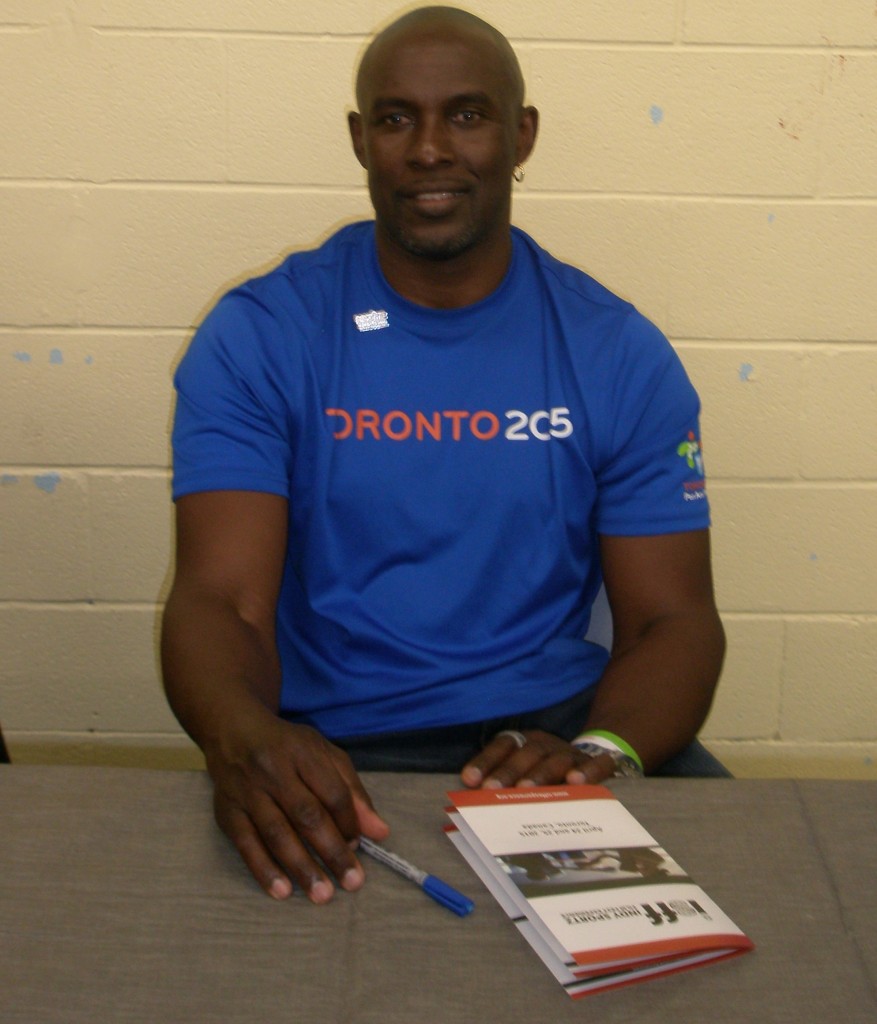 Ricky Johnson and Rocky Johnson formed the  “The Soul Patrol.” The brothers held the prestigious NWA Polynesian Tag Team Championship on two occasions in the mid-1980s (84 and 85). Attendees got the opportunity to ‘cut a promo’ with this former tag team champion and uncle of mega-movie star, “The Rock”. 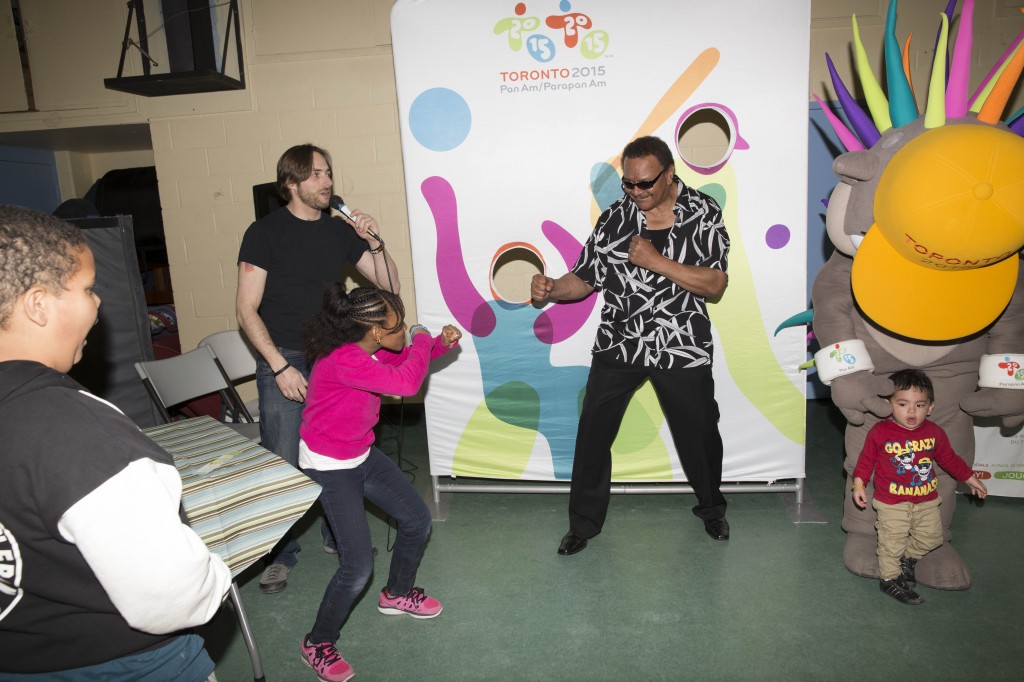 Michael ‘Pinball’ Clemons, former Canadian Football League (CFL) player and Grey Cup champion made an appearance at the Fan Experience. The kids and youth were thrilled to see him. 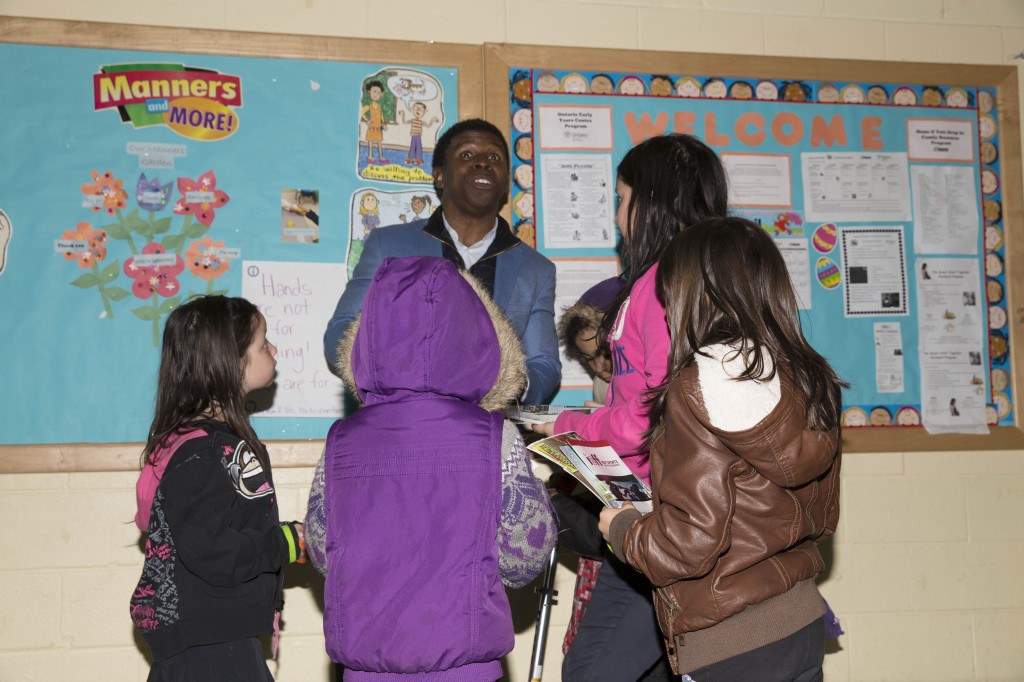 Mike ‘Pinball’ Clemons with kids at the ISFFE 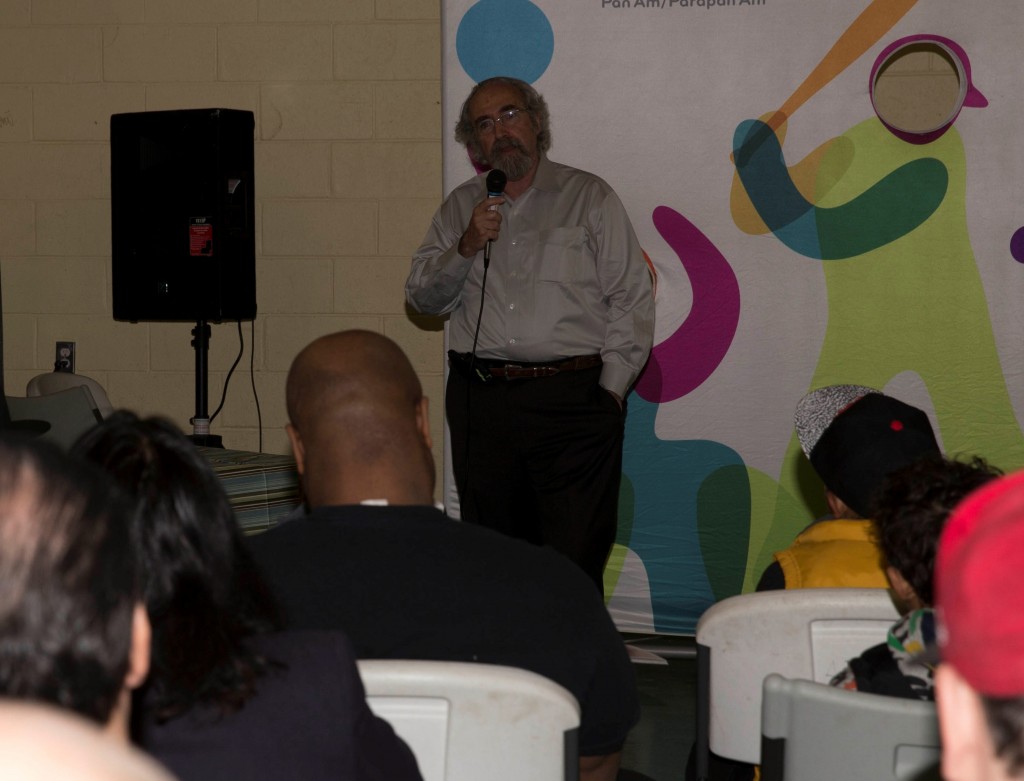 Author and sports journalist and writer for SLAM Wrestling, Greg Oliver attended the Fan Experience along with his son and author, Quinn Oliver who shared his book, ‘Duck with a Puck’ with young Fans. 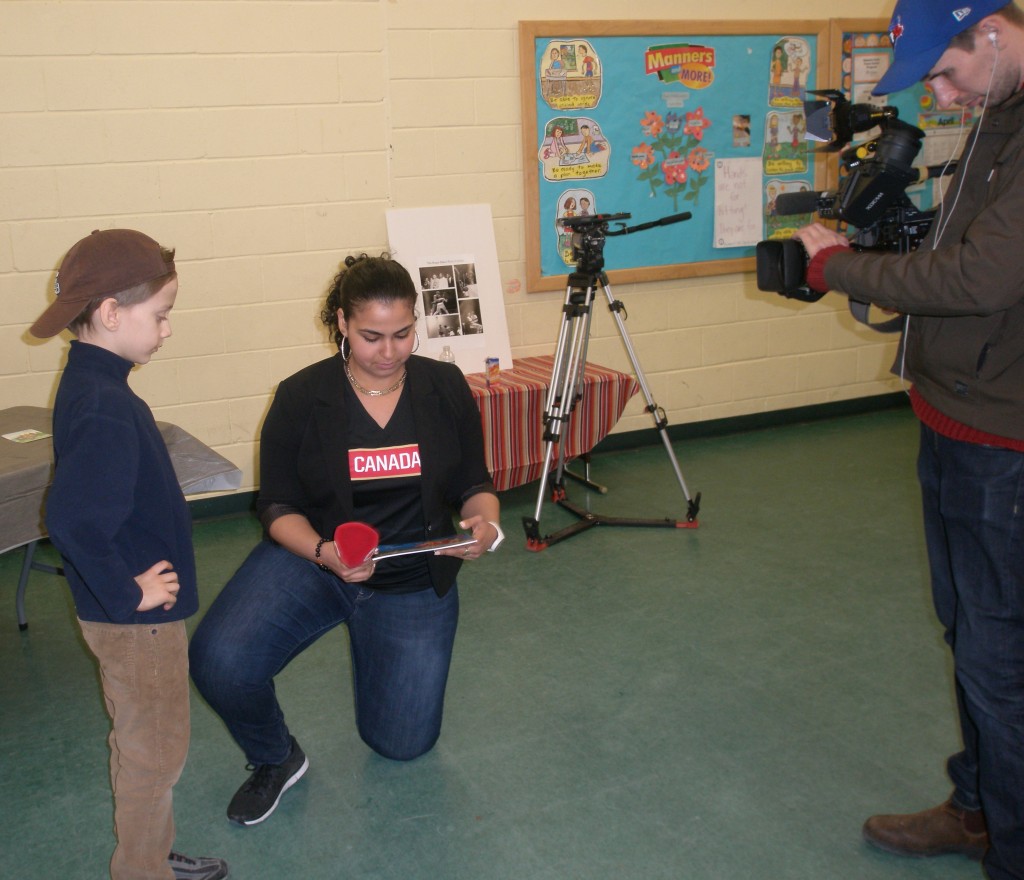 Toronto photographer, Roger Baker has been capturing sports activities on film for several decades. An exhibit of some of his photos was shown at the 2015 ISFFE , covering boxing and wrestling from the 1950s and 1960s including photos of the ‘The Greatest’ himself, Muhammad Ali.

George Chuvalo, heavyweight boxing legend
Photo from the Roger Baker Exhibit
2015 Opening Night featured the debut of the documentary short, ‘Chuvalo: Never Knocked Down’, the most famous Canadian boxer and one of the great heavyweight champions of his era. The documentary features an appearance by world famous comedian, Russell Peters. It is produced and directed by Aaron Weiss with the assistance of motivational speaker, and former boxer, Spider Jones. Editorial assistance was provided by Justin Arjune. (See www.artandparanoia.com)
The film was also screened at Canada’s Sports Hall of Fame in Calgary.
See a clip of the documentary. (https://www.youtube.com/watch?v=CRqttmwMvQ0)