Alexandra Park Community Centre in Toronto, a charitable organisation, is the official community partner with the festival. The Centre assists in administration, helping with outreach and involvement of marginalised youth and other vulnerable populations, and supporting youth in submitting short films to the Youth Showcase.

The Festival welcomes sponsors from companies, NGOS and Foundations on an on-going basis. The event has great potential for growth and creating synergy among various sectors – Sports, Film, corporations, educational institutions, NGOs, and government.

The festival is also accepting donations to cover the costs of this non-profit event. Donors will receive a charitable donation receipt, as Alexandra Park Community Centre is a registered charity.

Prizes from donors and sponsors 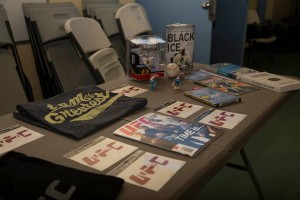 CFLPA – A 2013 CFLPA All-Stars framed picture was donated to the festival by the CFLPA for ISFFE fundraising. Councillor, Joe Cressy purchased the item and donated it to the APCC. Thanks, Councillor!