The festival is working with community organizations in Toronto to host workshops for disadvantaged local youth to create shorts to submit to the Festival for the Youth Short Films Showcase. The workshops will not only provide technical skills on filmmaking but will serve as a mechanism for self-expression, creativity and empowerment, providing a voice for the voiceless.

Local youth in Ontario interested in participating in the Youth Shorts Films Showcase can email us at info@isffexperience.org or through the ‘Contact Us‘ page.

Undergraduate students from Ryerson’s Sport Media program are mentors for the young film-makers. It’s a win-win for mentors and mentees, as the Ryerson students will receive course credit for their community work.

Local youth from the APCC created sport shorts to submit to the Festival for the Youth Short Films Showcase which include: Still Standing; APC – Then and Now and From the APC. We had some great prizes for the youth showcase participants.

STILL STANDING looks at the life of a martial artist. Gary Goodridge, former MMA, Boxing and Arm Wrestling champion, sits down with a local youth from the APC (Trevor) to explore issues such as: financial literacy; the importance of being dependable and hardworking; overcoming prejudice; the link between domestic abuse and head injuries as it pertains to athletes. (Producer – Trevor)

FROM THE APC is a profile on a local professional athlete (CK) from the APC. Prior to leaving for France to play Basketball, CK shared his experiences growing up in the area, and spoke to themes related to: the importance of work ethic in the pursuit of your dream; the role family played in his success; overcoming bullying and racism; the value of education; and how sports operates as a metaphor for life. Producer: CK.

APC – THEN AND NOW is a short biopic of  Ricky Atkinson, a former boxer from the Alexandra Park area who faced challenges in his life and now focuses on helping youth in the community.

These works were showcased at the Art Gallery of Ontario, Jackman Hall Theatre on Sunday April 17th, 2016, as part of the Youth Showcase. 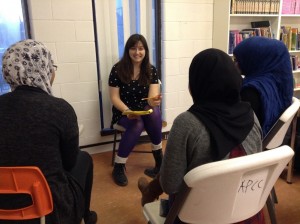 First place winner, CK for the film “From The APC” was awarded a signed Chicago White Sox Jersey as well as a limited-edition photo-Art piece featuring Gary Goodridge.